During the current 2019 coronavirus disease (COVID-19) pandemic, several worrisome variants of severe acute respiratory syndrome coronavirus 2 (SARS-CoV-2) have emerged, including alpha (B.1.1.7) , beta (B .1.351), Gamma (P.1) and Delta (B.1.617.2) variants. All VOCs are associated with increased virulence, transmissibility and / or resistance to neutralizing antibodies in vaccinated or previously infected individuals.

VOCs exhibit a variety of mutations within the SARS-CoV-2 spike (S) protein, several of which are present in the receptor binding domain (RBD). Certain mutations result in increased binding to the angiotensin-converting enzyme 2 (ACE2) receptor in the host cell. An example of this type of mutation is the N501Y mutation, which is linked to increased transmissibility of SARS-CoV-2. However, with immunity acquired through infection or vaccination, mutations might arise more closely related to antibody leakage.

Several studies looked at RBD antibodies in COVID-19 patients before variants of SARS-CoV-2 were identified, which are called non-VOC antibodies. Non-VOC RBD antibodies have been shown to exhibit a selective response for specific epitopes with increased recruitment of certain germline genes, the most important being VH3-53 and closely related VH3-66, as well as VH1-2. A recent study evaluated the serum of patients infected with the beta variant to determine whether major non-VOC antibodies could neutralize this virus.

What is the difference in reactivity between RBD beta antibodies and non-VOC RBD antibodies?

The authors of this study, published on the bioRxiv* preprint server, isolated CD19+CD27+ Memory B cells from 12 participants who had SARS-CoV-2 Beta variant infections to study the difference in reactivity between RBD Beta and non-VOC RBD at the level of monoclonal antibodies (mAbs). Compared to mAbs from uninfected individuals, analysis of the sequences of participants revealed an enrichment of certain VH genes, such as VH1-58, VH3-30, VH4-39 and VH3-53, which shows preferential recruitment of VH genes.

Among the mAbs collected from the cohort of this study, the number of somatic hypermutations was relatively low. This result is consistent with previous reports of SARS-CoV-2 infections without VOCs. Collectively, the results demonstrate the conservation of specific antibody sequence characteristics between different antibody responses in individuals and between antibody responses that occur against the beta variant of SARS-CoV-2 and non-VOCs. .

The authors compared the antibody sequences after beta infection to all previously published non-VOC antibodies. To this end, the authors discovered several clonotypes, some of which were present in several study participants. These results show that a subset of antibodies directed against RBD Beta and non-VOC RBD converge towards the recruitment of specific germinal genes.

What are the binding properties of antibodies induced by the beta variant of SARS-CoV-2?

To establish the binding properties of antibodies induced by the beta variant of SARS-CoV-2, the authors selected mAbs for expression and further characterization based on specific criteria. These criteria included mAbs that were extended clonally in one patient, mAbs from clonotypes present in multiple participants to interpret the shared antibody response to RBD Beta, mAbs from clonotypes to identify cross-reacting mAbs, VH3 mAbs. -53 / VH3-66 to interpret the unexpected recurrent shared antibody response against RBD Beta, and VH gene mAbs with the highest enrichment. 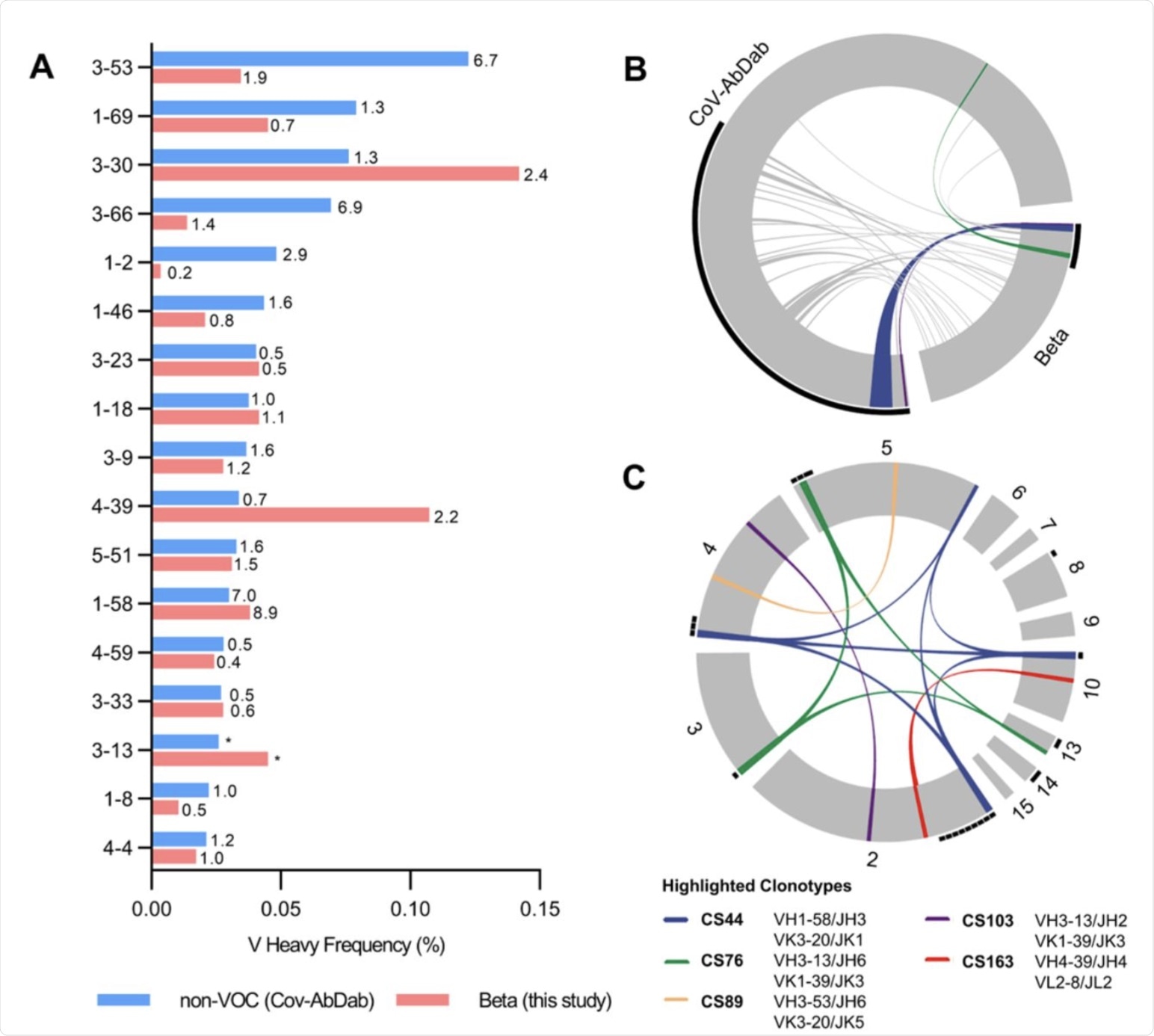 Use of the germline gene and analysis of the beta-induced antibody clonotype. (A) The use of the 289 mAb RBD Beta IgG VH gene from this study (red) is compared to 1037 mAb non-VOC RBD from 96 previously published studies (blue, Cov-AbDab) (17). The frequencies of the mAbs encoded by each VH gene are shown as bars. The enrichment of the indicated VH genes is compared to healthy individuals (31) with the enrichment of the fold indicated by a number next to the bars. Frequencies of the VH gene that have not been reported in healthy individuals (31) are indicated by an asterisk . Only VH genes with a frequency of at least 2% in Cov-AbDab are shown and VH genes are classified by frequency in Cov-AbDab.(B) The Circos graph shows the relationship between 289 mAb IgG from this study (beta) and 1037 mAb previously published human mAb reactive to RBD (non-VOC) from 96 studies (17 ). The interconnected lines display clonotypes shared between the two datasets, as defined by the use of the same V and J gene on the heavy and light chains of Ig. Thin black lines at the outer border of the circle indicate extended clonotypes in the respective dataset. (VS) Circos plot displaying the 289 IgG mAbs from this study grouped by patient. Interconnected colored lines indicate clonotypes found in more than one patient. Small black angles at the outer border of the circle indicate clones expanded by cloning in a patient. (BEFORE CHRIST)

The colored interconnect lines represent clonotypes found in more than one patient in our cohort.

The authors also determined the residues that establish the binding selectivity of mAbs for the 37 mAbs specific for RBD beta via enzyme-linked immunosorbent assay (ELISA). For the three RBD mutations that define the beta variant (K417N, E484K, and N501Y), the authors identified mAbs with RBD binding that depended on a single residue, while the RBD specificity of other mAbs depended on multiple residues.

A wide variety of VH genes code for RBD Beta specific mAbs. All of the VH4-39 mAbs with RBD Beta specificity from three different participants were all dependent on Y501, which accounts for 81.8% of the mAbs in the specific category.

From this finding, it could be suggested that there is a common binding mechanism of these mAbs that depends on Y501, a mutation found in RBD Alpha, Beta, and Gamma, but not Delta. This observation may explain the frequent use of VH4-39 in RBD Beta mAbs.

Few somatic hypermutations were revealed by the mAbs dependent on VH4-39 Y501 in the VH genes; however, no uniform pattern in other sequence characteristics was observed. Despite all of the specific VH4-39 RBD beta mAbs binding to a Y501-dependent epitope, there are notable differences in their neutralizing activity against genuine beta virus.

The results of this study provide important information that could be taken into account for the design of next-generation vaccines and antibody-based therapies against the current VOCs of SARS-CoV-2 and any future variant of SARS-CoV-. 2 that could arise. For example, vaccination programs based on various RBD sequences could be analyzed for superiority in the induction of cross-variant immunity, including the recruitment of very potent VH1-58 antibodies.

Promising antibody titers between cross variants have already been demonstrated in new vaccine candidates in preclinical trials based on the beta variant. It could be suggested that, in parallel with these clinical trials, studies to characterize the immune response concerning other variants should be carried out, notably including the Delta variant, which is currently the dominant VOC in the world.

publishes preliminary scientific reports which are not peer reviewed and, therefore, should not be considered conclusive, guide clinical practice / health-related behavior, or treated as established information.