Diversification is one of the golden rules of investing. Not everyone is watching as some seek to make money from the latest investment fad, but in these trying times it makes more sense than ever. So make sure your investments are spread across stock markets, individual stocks, and funds.

If you don’t understand the benefit of this approach, I invite you to quickly read how F&C investment trusts are managed. Its modus operandi is built around diversification – and while the returns it generates may seem unattractive when stock markets are rising, it tends to triumph over the long term.

Think of the story of the tortoise and the hare you were told about in school – long-term success often comes down to those who take a steady rather than an enthusiastic approach. The fact that F&C is set to join the excellent FTSE100 index this week says it all.

Make a stash: The rights to songs such as Pink Floyd’s Money, on The Dark Side Of The Moon album, (inset), are lucrative assets

However, diversification is not only essential to ensure the constant growth of the value of your portfolio over the years. It is equally important when it comes to generating income from your investments. You don’t want all your income eggs in one basket.

Currently, most investors derive income from UK equities, UK investment funds and exchange-listed investment funds. This is common sense. After all, investing in the UK stock market feels reassuringly close to home despite the fact that many of the companies listed there have their business operations located on the other side of the world.

The UK stock market has long been a bountiful breeding ground for dividend-hungry investors. Currently, the stock market, as represented by the FTSE All-Share Index, generates an average annual income of 3.4%. Far from the rate of inflation – 10.1% and rising – but better than most interest rates you can get from savings accounts, plus you have the potential to see the value of the capital you have invested grow in the long term.

Yet UK dividends are not guaranteed. We saw it in 2020, when many companies suspended payments in response to the lockdown and the pandemic.

With a cost of living crisis looming following Friday’s latest energy price cap increase and the possibility of a deep recession increasing by the day, some UK businesses may have to either close their dividend tap, or cut payments to a drip. .

Russ Mould, chief investment officer at wealth manager AJ Bell, estimates the total dividends paid out this year by the 100 biggest companies will “nearly match” the £85.2billion paid in 2018. But he says the analysts expect very weak dividend growth next year.

He adds: “Mining giant Rio Tinto is set to be the biggest dividend payer on the FTSE 100 this year, ahead of Glencore and Shell.

“The top ten payers are likely to generate more than 50% of the index’s dividends. Some investors, however, may not like to rely on these companies for philosophical or environmental reasons.

Of course, many UK listed companies – the miners, the oil companies – will continue to pay dividends, but the case for diversifying investment income has never been stronger.

Fortunately, alternative income opportunities abound, although as with all investments, they are not without risk.

The biggest provider of this alternative income is the investment trust industry. Over the past decade, leading wealth managers have launched a range of trusts to invest in assets that produce a steady stream of income. Most of this income is passed on to shareholders in the form of dividends.

Alternative income-generating assets include major infrastructure projects – roads, prisons and housing for the armed forces – and renewable energy (wind and solar farms). They also encompass more original assets such as the royalty rights to the songs that have framed our past: Pink Floyd’s Money (if any), Amy Winehouse’s Back To Black, Nirvana’s Smells Like Teen Spirit, and Rihanna’s Umbrella.

Although these assets are illiquid, the fact that they are held within a publicly traded trust means that investors can still buy and sell their shares, even if they don’t particularly like the price being offered.

Alternative investments are an asset class that has exploded in size, having almost quadrupled in the last ten years to reach £124 billion.

According to data compiled by Link Group, dividends from alternative investment trusts are nine times higher than in 2010. In the 12 months to April this year, they paid out £3.65billion in payouts.

To put that figure into perspective, the equivalent payouts from trusts investing in income-friendly stocks was £1.85 billion. The Association of Investment Companies says that the annual income of alternative trusts tends to be higher in percentage terms than that of equity-based funds. But the possibilities of capital return are limited. The average infrastructure trust pays an annual income of 4.8%, while the average renewable energy infrastructure fund pays 5%. The equivalent figures for UK equity income and global equity income trusts are 4% and 3.8% respectively.

WHAT ARE THE MAIN ALTERNATIVE INCOME OPTIONS?

According to investment expert Jason Hollands, director of wealth manager Evelyn Partners, infrastructure is “the vital plumbing an economy needs to support long-term growth”. It encompasses everything from transportation and power transmission systems to schools, universities, prisons and hospitals.

Infrastructure trusts either own these assets and collect revenue from them, or manage them for the long term (usually on behalf of the government) in exchange for an agreed annual revenue stream. In some cases, these revenues will be increased to take into account the increase in prices, which is useful in the current context. 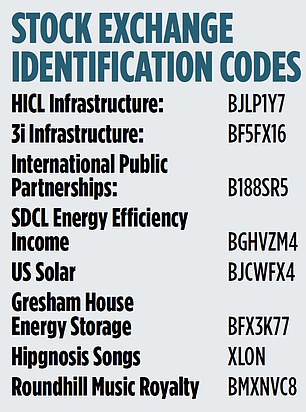 “Investors like these trusts because the income they generate is predictable and often backed by government contracts,” says AIC’s Nick Britton.

The biggest trust, described by Hollands as “high quality”, is HICL Infrastructure. Its £3.3bn of assets are invested in over 100 projects.

These range from managing the A63 toll motorway in south-west France to managing Brighton Children’s Hospital in East Sussex on behalf of Brighton & Sussex University Hospitals NHS Trust.

Revenue from these projects generates shareholder income of 4.8% per year, with dividends paid quarterly. Over the past five years, the trust has generated total returns to investors of 36.8%.

Some of these trusts – like 3i Infrastructure, International Public Partnerships and HICL – are victims of their own success, with share prices boosted by strong investor interest. So anyone wishing to join the party should exercise caution as the stable income they receive could be jeopardized by capital losses later on.

Investment trusts that invest in renewable energy have stakes in wind and solar farms, making money for investors from the energy generated by the farms, which is then resold.

Britton says their attraction is twofold. He explains: “You support the production of green energy and receive an attractive income.

Hollands likes SDCL Energy Efficiency Income. The trust invests all over the world – from projects in the United States that convert livestock manure and food waste into green gas, to companies such as the Swedish company Vartan Gas that supplies gas (mainly biogas) to homes and businesses in Stockholm. Hollands said: “It is well placed to take advantage of the wave of green regulations sweeping across Europe – and the development of energy efficiency sectors in the US and UK.”

The £1 billion fund pays investors quarterly dividends, equivalent to an annual income of 4.7%. Over the past three years, it has generated a total return of 28.0% – it launched in late 2018.

Other interesting trusts in this space include US Solar – a £292m fund invested in over 40 solar projects across the US. It is the only London-listed trust to focus on solar energy in the United States and is currently generating income of 6.6% per annum.

Another is Gresham House Energy Storage which invests in facilities to store wind and solar power and then transmit it to customers when needed. It currently controls around 30% of the battery storage market.

The trust pays quarterly dividends, generating an annual income of 4.2%. The only downside is that the stocks look expensive.

Some links in this article may be affiliate links. If you click on it, we may earn a small commission. This helps us fund This Is Money and keep it free to use. We do not write articles to promote products. We do not allow any business relationship to affect our editorial independence.